Why Your Brain Thinks Sugar is a Schedule II Drug 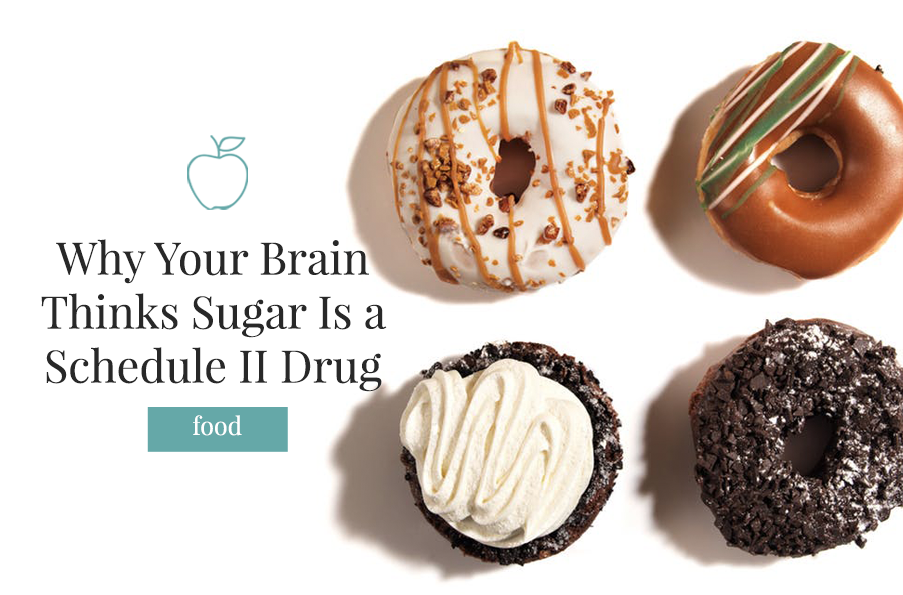 A lot of us use the word “addiction” pretty loosely, just meaning that we particularly love something or have strong psychological cravings for it. But more and more research is emerging to show that the human brain is hardwired to have a real, chemical addiction or dependency to sugar, in the clinical, not metaphorical sense.

Granted, a lot of this research should be taken with a grain of salt (but not a grain of sugar, ha ha). After a Connecticut College undergraduate project showed that one group of rats reacted to choice between sugar and rice cakes similarly to a different group of rats faced with a choice between cocaine and saline, headlines warned “Oreos May Be As Addictive As Cocaine” (TIME) and “College study finds Oreo cookies are as addictive as drugs” (Fox News). However, Edyth London, a researcher at UCLA cautioned, “The study performed cannot determine whether Oreos are as addictive as cocaine. That question is best addressed in a comparison of how hard a rat will work for Oreos versus cocaine — how many times a rat will press a lever to get one or the other.”

Notwithstanding researchers’ natural reluctance to make sweeping, headline-friendly pronouncements, there is at least some cause for concern, if not outright alarm. Refined sugar, i.e., sucrose, is basically a 50-50 mixture of the carbohydrate glucose and the carbohydrate fructose, which is itself about twice as sweet as glucose (high-fructose corn syrup or HFCS is about 55% fructose and 45% glucose).

According to research cited in this New York Times Magazine article, fructose is metabolized primarily by the liver, while glucose is metabolized by every cell in the body. “Consuming sugar (fructose and glucose) means more work for the liver than if you consumed the same number of calories of starch (glucose)…[fusion_builder_container hundred_percent=”yes” overflow=”visible”][fusion_builder_row][fusion_builder_column type=”1_1″ background_position=”left top” background_color=”” border_size=”” border_color=”” border_style=”solid” spacing=”yes” background_image=”” background_repeat=”no-repeat” padding=”” margin_top=”0px” margin_bottom=”0px” class=”” id=”” animation_type=”” animation_speed=”0.3″ animation_direction=”left” hide_on_mobile=”no” center_content=”no” min_height=”none”][and] if the fructose hits the liver in sufficient quantity and with sufficient speed, the liver will convert much of it to fat. This apparently induces a condition known as insulin resistance, which is now considered the fundamental problem in obesity, and the underlying defect in heart disease and in the type of diabetes, type 2, that is common to obese and overweight individuals. It might also be the underlying defect in many cancers.”

Moreover, while there may not be sufficient evidence to say precisely that rats (and, by extension, humans) react to sugar the same way they react to cocaine, there is evidence of what happens to the human brain when it experiences a “sugar withdrawal”. Sugar activates the mesolimbic pathway, “a brain system that deciphers these natural rewards for us. When we do something pleasurable, a bundle of neurons called the ventral tegmental area uses the neurotransmitter dopamine to signal to a part of the brain called the nucleus accumbens.”

The major components of addiction – bingeing, withdrawal, craving, and cross-sensitisation (aka something being a “gateway drug”) – have all been observed in animal models of addiction for sugar as well as what we legally classify as drugs and narcotics. Like drugs, sugar triggers the brain to release dopamine, and eventually inhibits the brain from pumping the dopamine back out. In other words, with more sugar exposure, the brain needs greater amounts of sugar to trigger the same “sugar high”. Multiple experiments (see here, here, and here) have observed that “sugar withdrawals” lead to physical problems similar to drug withdrawals, such as teeth chattering, tremors in extremities, and head shaking, as well as depression and impulsive behavior.

Those studies show the dangers of sugar addiction, but the withdrawal symptoms are worth the immediate and observable results, says researcher Robert Lustig of UCLA. He conducted a study wherein children were fed a diet of the same number of calories, even a diet of unhealthy processed food, but with no added sugar, “every aspect of their metabolic health improved” without them losing any weight. “With added sugar cut out of their diet for 10 days, blood pressure, triglycerides, low-density lipoprotein (LDL, or “bad cholesterol”), insulin sensitivity and glucose tolerance all improved. And remember, we weren’t giving them just leafy greens and tofu – we fed the kids processed foods, just ones without sugar,” he pointed out. He concluded, “Sugar by itself furnishes energy, and that’s about it. In that sense, sugar is like alcohol. It’s got calories, but it’s not nutrition. There’s no biochemical reaction that requires it. And at high doses, alcohol can fry your liver…And this makes sense, because where do you get alcohol from? Fermentation of sugar.”

If this article caused you to feel a little heartburn, then I’m doing my job in bringing awareness of the harmful effects that certain ingredients can have on our bodies. I imagine that you must know someone who could benefit from a little hard truth, so please share this with a friend or co-worker. You could be just the person to help kick-start them into creating new, healthier habits.[/fusion_builder_column][/fusion_builder_row][/fusion_builder_container]