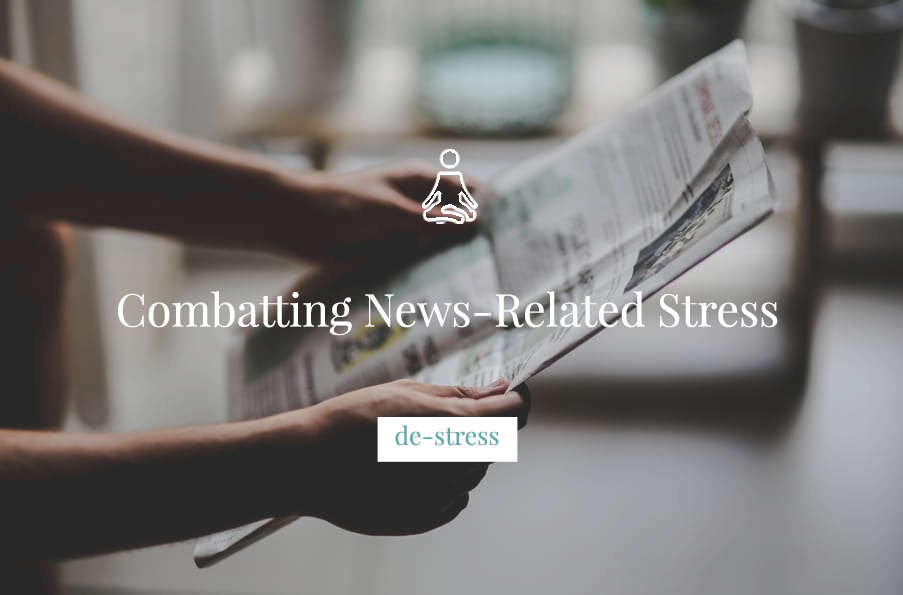 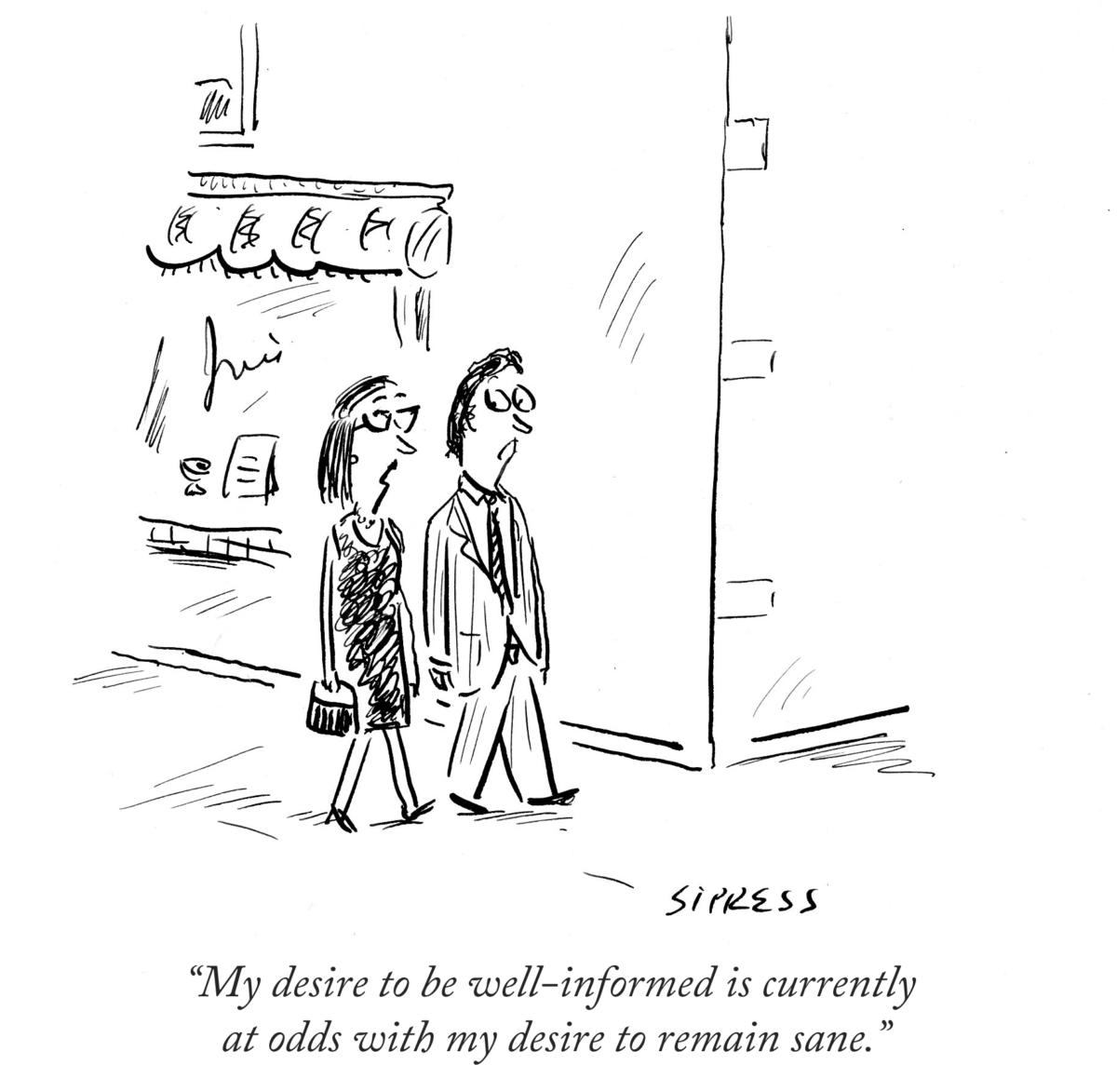 Last February, yet another study found that Americans – all kinds of Americans – are seriously stressed out about the future of our country. And think of how much has happened just in the last six months!

This is NOT a political post. This is a self-care post. My mission is to take you “From Stressed to Strong,” and the American Psychological Association, which conducted the study, represents psychologists around the country with the same mission – to help people better equip themselves to fully engage with their lives.

A popular cartoon by David Sipress currently making the rounds quips, “My desire to be well-informed is currently at odds with my desire to remain sane.” I know a lot of you feel this way; I certainly do! And like many of you, I have the sudden impulse to JUST TUNE IT OUT. But here’s the thing: that’s escapism/avoidance, and that’s not really being strong at all.

Escapism, in its most basic form, is intentional detachment and distraction from the real world. It allows a momentary reprieve from your circumstances, giving you a chance to recharge your batteries before you jump back into the fray. Of course, escapism, like anything else, can go too far. And to “Go From Stressed to Strong” means moderation, so think of escapism like salt or pepper. You can sprinkle it on top of your life to make it better, but too much will ruin the whole thing.

Intentional detachment can cause problems at work, damage personal relationships, and maybe even cause you to cut yourself off from normal social circles. Your productivity could nosedive as well. Escapism doesn’t make you lazy, per se, but too much can turn into avoidance and make you languish instead of continuing to actively pursue your goals.

If your response to stress is to disengage, you have not fully developed your distress tolerance techniques, so that’s exactly what you need to do. Dan Gillmor, a professor of media literacy at the Walter Cronkite School of Journalism and Mass Communication at Arizona State University, suggests altering your media diet along the lines of the “slow news movement”, named after the slow food movement, which maintains it is better for consumers’ health to cook and eat more slowly.

I call this “strategic disengagement,” allowing you to take care of yourself without allowing yourself to give in to ultimately harmful coping mechanisms like complete disengagement. Part of being strong is not having blinders, and being a participant in your own life. And you can’t mute a certain part of your life, and the news/politics/whatever you want to call it is part of your life. It affects you, even if you don’t think it does.

Whether you’re a Democrat, Republican, Libertarian, Green, unaffiliated, or something else entirely, you live in this world, in this society, in this country. The truth is, you probably are a lot more affected than you want to admit to yourself (because not admitting it gives you license to tune out, which is the tempting thing to do, I get it!). I’ll be honest, I recently had to disarm news updates going to my watch. For example, I would be at the gym (for only sixty minutes), and in that short period of time, four to five major updates would come across the wire, causing the watch on my wrist to wildly vibrate, and each time I looked down, I had to catch myself before yelling out loud “HOLY $#&@, you’re not going to believe this”!

It became exhausting. My pulse would skyrocket and it would take minutes before I could calm down. It became a distraction and affected my workout. So, what could have become an unhealthy pattern quite quickly, was nipped in the bud. I immediately made a conscious effort to better control the frequency and level of my own engagement with news and the media by changing my habits of “when” and “how often” I consume content.

And even assuming that I’m wrong, that you’re completely insulated, and that you’ll be fine – a lot of people won’t be fine, and your temptation to disengage in the name of avoiding stress is a luxury that many people just don’t have. Part of being strong means finding room, and energy, and strength, for *empathy*. I know, I know, that’s really hard, particularly the more informed we are of other people’s pain. It’s ironic, isn’t it? The more we witness others’ trauma, the less capable we feel of having empathy and compassion for it. There’s even a term for this phenomenon: Compassion Fatigue!

Lack of awareness of symptoms and poor training in the risks associated with high-stress jobs can also contribute to high rates of compassion fatigue, so be aware.

Try coming up with a strategy for handling stress when you do feel it come on after watching the news or reading an article. A good if-then plan is an excellent mechanism for coping with unwanted thoughts and disruptive feelings. The key is to plan out, in advance what you will do when the thought pops up in your mind. It can be as simple as saying to yourself, “If the thought comes, then I will ignore it.” Some may prefer to replace the unwanted thought or feeling with a more positive one.

Now, I am not saying that we should go around blocking out all the unpleasant thoughts or feelings that come our way. There are times when we do truly need to reflect on the bad things that happen to us, and those around us, to understand their significance, to come to terms with our feelings, and to learn and grow from our experiences. But when there really isn’t anything to be gained from reflection or dwelling on an issue – when a thought simply prolongs pain – it’s good to know that there really is a way to rid yourself of it and move on.

My wish for you is that you find and maintain strength for yourself so you can also be strong for those around you. Strength is ultimately a tool to help you do well and do good, for yourself and for others. You can’t take care of anyone else and be your best if you’re not operating at your best.

Hang in there. America is training for a marathon, not a sprint.

If you would like helpful tools, recipes, workouts, and techniques to reduce stress, then check out my 6 week program Ready | Set | Strong which starts on Sept. 11th. Registration is now OPEN!