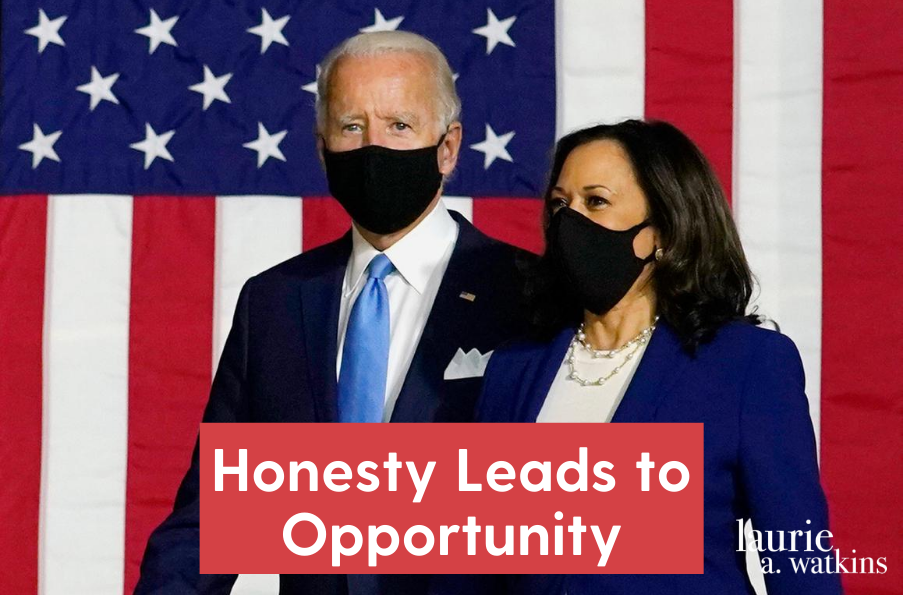 What an exciting week!  Kamala Harris FOR THE WIN!  Very few things will get me up and dancing and posting about it on my Instagram, but this was one of those things!

I was thinking all week about Kamala and the other female potential nominees as I prepared for my TV interviews. I kept thinking of the vetting process, and the Presidential primary, and what was said between each of the candidates, any bad blood, spars, jabs, etc.

As I was analyzing each of the women, and their pluses and minuses, I remembered a moment in Miami on June 27th 2019 during the Democratic Primary debate. I remember it well because I was there in the audience. About an hour into the debate, Harris, a black former prosecutor, leapt into the cross-talk with a request to speak “on the issue of race.”

She then focused her attention on Joe Biden, and after making clear that she did not believe he was a racist, proceeded to sharply criticize his opposition to school busing in the 1970’s and opened up about her own history. “There was a little girl in California who was a part of the second-grade class to integrate her public schools and she was bused to school every day,” she said. “And that little girl was me.”

Ouch! Kamala landed a jab right across the jaw of Biden. It stung. But, he took it.

He heard what she said. He listened. He reflected. He considered. And he chose her anyways.

Kamala was honest. And look where it landed her.

Kamala would be the first Black and Asian-American VP ever, as well as the first female VP.

Harris was born in Oakland, CA in 1964.  She has served in several roles, making history time and time again:

In her three years in the Senate, Kamala Harris has introduced or co-sponsored legislation ranging from providing tax cuts for the middle class, addressing the issue of high rent costs, making education more affordable or even free, protecting rights of refugees and immigrants, expanding access to healthcare, and most recently, reforming the criminal justice system (the Justice in Policing Act after the death of George Floyd).

Just a couple weeks ago, I wrote about gender equality.  One of my personal favorite moments watching Kamala Harris over the last few years was her confrontation of Brett Kavanaugh, asking him directly, “Can you think of any laws that give the government the power to make decisions about the male body?” BOOM!  Her continued honesty and ability to stand up to others, especially men of power, is what is getting her to where she is today.

We have always witnessed a true, beautiful honesty from Kamala Harris.  She is honest with the public, and more importantly, with herself.  Honesty, which promotes openness and transparency, seems to be one of her core values.  She doesn’t hide from her past or how she got to where she is today.

In a political world that today is full of lies and deceit, it is truly important to remember the value of honesty.  Honest hard work, honesty with the voters, honest facts about who you are and what you stand for, and honesty about what you stand against.  Honesty.

It would have been easy for Joe Biden to be intimidated by her honesty.  Instead, he embraced it.  He sees what I see.  Someone that has self-awareness, emotional intelligence, and guts!  And look where it got her!  My last Zoom call was a check-in with friends to see how we were doing mental health wise.  She gets a Zoom call asking her to be a VP!

Honesty with yourself can provide you with a fulfillment that enables you to like who you see in the mirror and sleep well at night.  Honesty with others can gain you respect in the workplace and personally.

We have all heard those expressions: honesty is the best policy, the truth will set you free, the truth always comes out, the worst truth is better than the best lie, once trust is broken it can never be regained… These are popular sayings for a reason, and they all center around having the core value of honesty.

Honesty gains people respect.  I respect Kamala Harris.  I respect where her honesty got her.

And how about you? I strongly encourage you to be honest about your words, actions, wants and thoughts. How can you be more honest with yourself, and with others? Who are you showing up as? Your true self? If not, what are you afraid of?