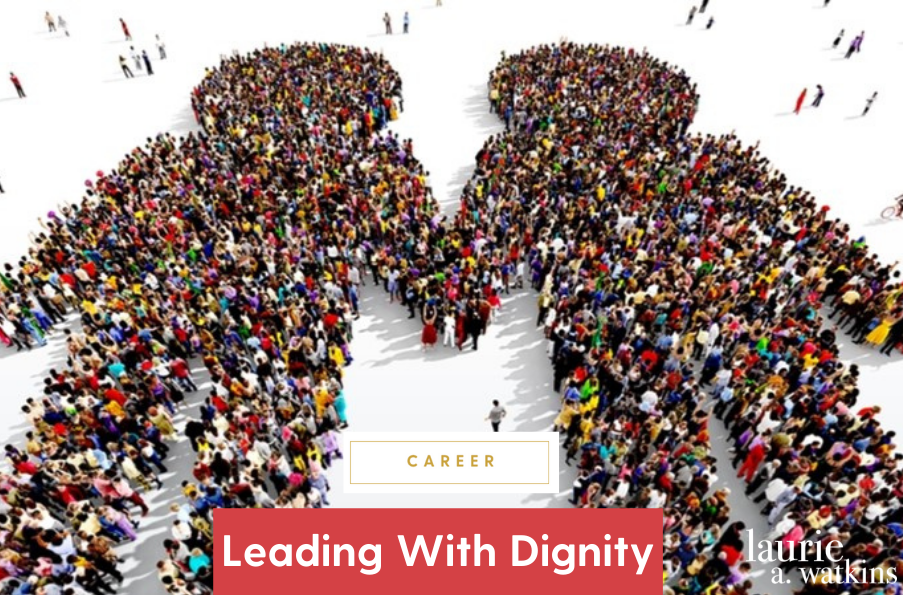 People want to be treated well, and when they are, it brings out the best in them.

Given all the recent news stories of people having their dignity violated, there has never been a more important time for dignity to be recognized.  It can be key to understanding organizations, communities, even personal and professional relationships.

Dignity MUST be a given.  Respect is earned.  Respect relates more to behavior while dignity teaches civility and humanity.

We should use dignity as our anchor and what grounds our work in the belief that everyone deserves to be treated as though they are valuable.  Focusing on dignity can also help us deal with abusive or bullying bosses.  We do not need to respect everyone; but, we do need to treat everyone with dignity.

Leaders, both professionally and personally, play a role in creating an environment that honors the dignity of others.  When everyone feels that their dignity is honored, it creates a more tranquil and happy space for everyone to enjoy.  Professional, spiritual, political, personal, racial, gender-based… no matter what the area is, there are ways to treat others with dignity.

Dignity is not a traditional buzzword in the business world, or even in conversations about relationships.  I remember hearing a few years back about a group of people that were interns at various large name investment firms in New York.  While paying astronomical rent prices in Manhattan, these interns were being wildly overworked and underpaid.  Many even began leaving a pillow and sleeping bag at the office, never getting to enjoy the expensive homes they were paying to “live in.”  No matter how much they worked, they were always encouraged to work more.

This type of work culture does not respect the dignity of hardworking individuals.  It does not create an environment that brings out the best in people.  No one can be their best or perform their best professionally when they are overworked, exhausted, and undervalued.

If you are leader, some ways to help foster a culture where people are able to maintain their dignity include:

Having a general sense of empathy can really be a key part of leading with dignity.  It can also just start with ourselves.  Be sure that what you are doing excites you.  Spend your time doing what you believe in.  Take care of yourself.  If you are a good version of yourself and make your own dignity a priority, it will help you see how important it is to recognize the value and dignity of others.

As Hicks writes in Leading with Dignity, “The emotional volatility associated with having our dignity honored or violated cannot be overstated. When people feel that their value and worth are recognized in relationships, they experience a sense of well-being that enables them to grow and flourish. If, in contrast, their dignity is routinely injured, relationships are experienced as a source of pain and suffering…. Why is this knowledge important for leadership? If we are going to lead people, we better understand them.”

I would love to hear from you!  Did you learn that dignity and respect are different things?  When was the last time you were treated with dignity?  When was a time that you weren’t?  How did those situations make you feel?  Please share a comment here on the blog.