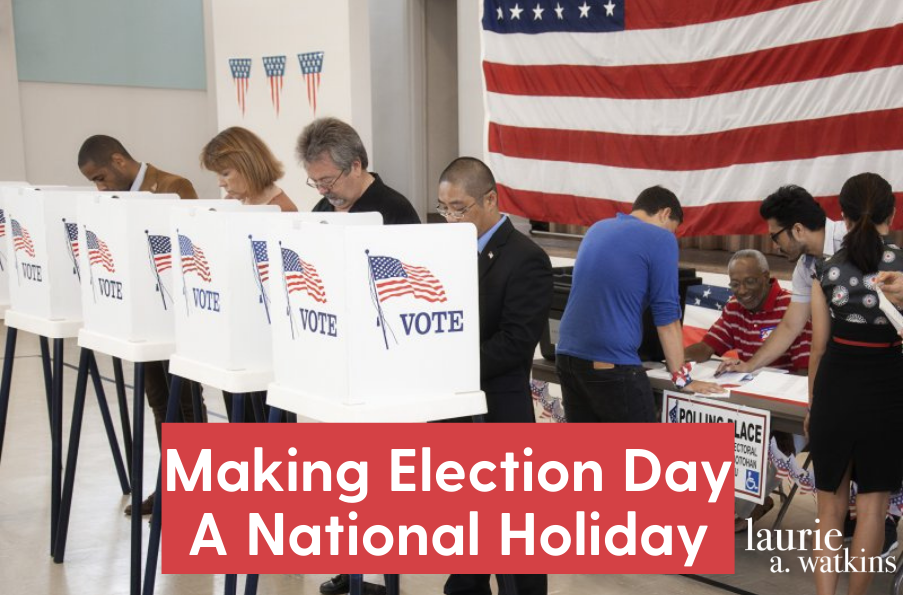 Election Day in the United States has taken place on the Tuesday following the first Monday in November since 1845.  The history of this is mainly to benefit farmers, a previously large population of voters. Since they were unable to travel to polling places during colder months, and typically sold crops on Wednesdays, that eliminated certain days and seasons.  In addition, Sunday was seen as a day of worship even back then.

As voting rights expanded beyond just white, male landowners over the age of 21, the population of people who could vote grew vastly.

Currently in the United States, we observe 10 national holidays.  To add Election Day to this list, a bill would need to be passed by Congress and subsequently signed by the president.  This is already observed in New York, Hawaii, Kentucky, and most recently Virginia (April 2020).

According to Pew Research Data, voters on all sides of the issues support Election Day being a holiday: 71% of Democrats and 59% of Republicans are in favor of the idea.  Also, in their data it was found that the U.S. ranks 26th in voter turnout globally.

It seems like making Election Day a national holiday would benefit everyone.  Making it a national holiday would increase voter turnout.  Enduring long lines or having to decide on childcare are some of the barriers making it harder for some people to vote.  Instead of the “rush hour” times of voting before and after work, having Election Day as a holiday would enable people to vote whatever time of day is convenient for them.  Many people even have to take public transportation to head to the polls, a cost that some cannot incur while having to take a few hours off to vote.  Having this simply be a paid holiday would benefit working mothers, more young people, less affluent communities, and even emergency personnel.  More people would be enabled to vote without having to take time off of work to head to the polls.

A census survey of roughly 19 million registered voters who did not participate in the 2016 election found that 14.3% (2.7 million people), said they were too busy to vote.  In that election, a little more than 60% of U.S citizens who voted, 73.3% of them were white.  They also said those who did not vote were, “more likely to be younger, less educated, less affluent, and nonwhite.”  These are some of the demographics many politicians try to drive to the polls in current times.  Having Election Day as a national holiday would enable all these lower turn-out populations to get to the polls.

Doing so would not be without controversy. The move could upend decades of tireless work by advocates, including Dr. King’s widow, to get Congress to establish the holiday in the first place. Our observation of the holiday would no longer accompany his January birthday, and the change would eliminate a three-day weekend. But with the change, the country could reap benefits that not only outweigh these losses, but also align with the principles Dr. King dedicated his life to.

Observing Dr. King’s birthday on Election Day would mean that more Americans have the day off, making voting more convenient for many of the 2.7 million who registered but failed to vote in 2016.  Voting would be spread out more evenly across Election Day, decreasing lines and wait time by dampening the surge at peak hours. And after casting their own ballots, Americans could show their commitment to democracy and their communities by using the rest of day to help the elderly and disabled get to the polls, serve as poll workers, or babysit for neighbors so that parents with young kids can vote in person. It was Coretta Scott King who said that Martin Luther King, Jr., Day should be treated as “a day on” devoted to service. What better way to serve and honor the dream than by encouraging millions of Americans to exercise their sacred right to vote?

This holiday would also turn voting into a celebration of patriotism and democracy. Having Election Day as a national holiday would send a strong message about our values as a country.  It is more than just allowing working people to vote, it would be a way to have the democratic process honored and even celebrated.  Historically, in the 1840s-1890s, election days were holidays.  In addition to the day off, public gatherings ensued full of food, drinks, and celebration.  Even children too young to vote got to participate in the merriment.  Voting is the backbone to a free society.

According to Pew Research Data, Election Day is a paid holiday for State workers in 13 states; however, some states that allow time off to vote will penalize employers that keep workers from exercising their right to vote.  In other states, voters only get a limited time to go to the polls, and don’t necessarily have to be paid if they choose to do so.

Given the importance of this election, quite possibly the most important of our lifetime, it is imperative that everyone gets their voice heard.  Given the Coronavirus pandemic, getting your vote in by mail is the best option ever!  It eliminates the need to schedule your time, to stand in a long line, to take public transportation, to find childcare… You fill it out, sign it, and mail it back. Want to make sure it was received?! Check with your local supervisor of elections by going online and tracking your ballot. Until Election Day becomes a national holiday you have many options; whether you vote early, by mail, or on election day, please make sure you have a voting plan and remember to vote for the down ballot candidates.

America can and should make it easier for people who want to vote to cast their ballots. And while the Election Day holiday would be an experiment, it’s one that along with other pro-voter policies could make voting less of a burden and more of a celebration. Strengthening our democracy does not call for an either-or strategy, but rather an all-of-the-above approach. Merging Dr. King’s birthday with Election Day — and honoring the hero on a day of unity and civic participation — is a compromise that should be part of that effort.