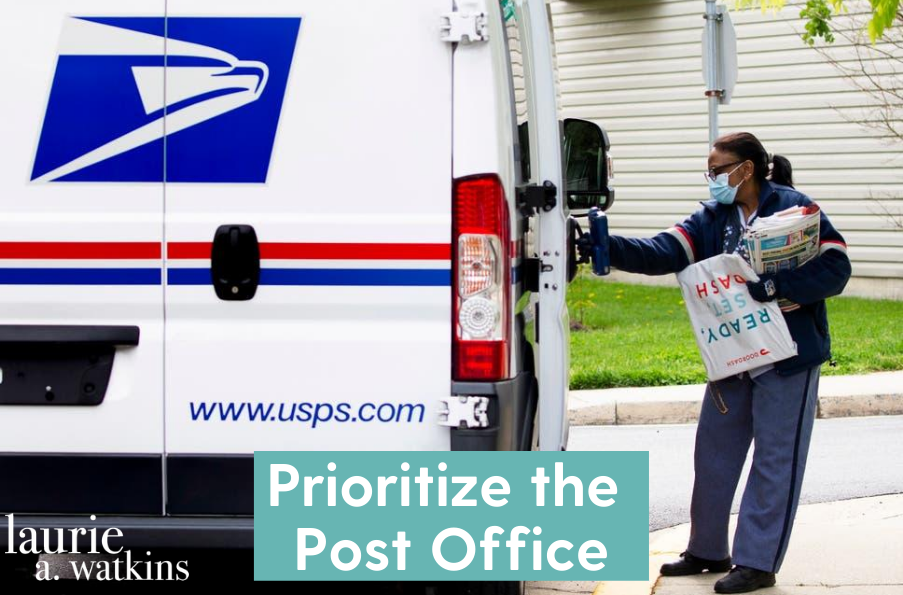 The global pandemic has accelerated the severity of already problematic finances at the USPS.

Having the right to an inexpensive, public postal service in the US goes back further than most amendments in the Bill of Rights.  The postal service can reach all 150 million American households because it is a public service.  This is not true for UPS or FedEx or even Amazon.  Our constitution tasked the government with instituting a national postal system with a postmaster general reporting to the president, and by 1971, it was made into an independent agency.  The post office has since been under attack by some politicians who disagree with funding public programs.

Many years later, in 2006, Congress passed The Postal Accountability and Enhancement Act (PAEA).  This bill required the USPS to create a $72 billion fund, requiring that it fund its employees’ future retirement and health benefits in advance, something no other federal agency has to do. This is a burden unique to the USPS.

Fast forward to April of this year, 2020, the USPS told Congress they would run out of money by September with a request for $89 billion in emergency funding.  The Coronavirus package gave the USPS $25 billion under the CARES Act, but the Trump Administration blocked this.  Instead, the USPS received $10 billion in the form of a loan.

After Louis DeJoy took over as postmaster general in June, he instituted measures such as eliminating overtime hours, instructing postal workers to leave mail behind if it leads to delays, and instituting a hiring freeze. After intense criticism, DeJoy said that he will suspend some of the changes underway until after the election — like removing mailboxes and mail sorting machines — but uncertainties still remain. One this is clear, this is not time to slash services at the USPS.

In this day and age, full of technology and instant communication, some people may wonder what the USPS is even good for anymore:

The suggestion of a privatized postal system would put many Americans and countless small businesses at risk.  70 million Americans live in areas that are remote enough they wouldn’t receive deliveries.  Their lives would be reverted back to expensive private delivery services or the need to travel extensive distances to get packages, including vital medications in some cases.

Small businesses would be hit especially hard as well.  Increased shipping costs mean an increase in prices for their goods, potentially losing customers.

Does this stress you out?  It certainly is stressing me out.  People are receiving their medications late, getting bills after they are due, payments received late to companies that need the funds, etc.  The toll on small businesses is extreme with increased shipping costs putting a burden on both business owners and consumers.  There’s also the election. You’ve likely seen the images of mailboxes being uprooted from the ground.  The streets of middle America and even large cities are missing their mailboxes.  People have even reported their PO Boxes being locked shut.  It seems rural America will be hit the hardest.

If we didn’t have enough stress already being stuck inside sheltering in place, we can add this to the list.  If you want to channel your stress into some good, there are some incredible ways to help.  Use your voice to make a difference.  Also use your voice this November.  Request your mail in ballot (at least 15 days before the election at vote.org) and buy your stamp to send it in!

And elected leaders, instead of financially starving the USPS and undermining its ability to do its critical job, need to fund the agency and support its vital role of helping Americans exercise their right to vote.