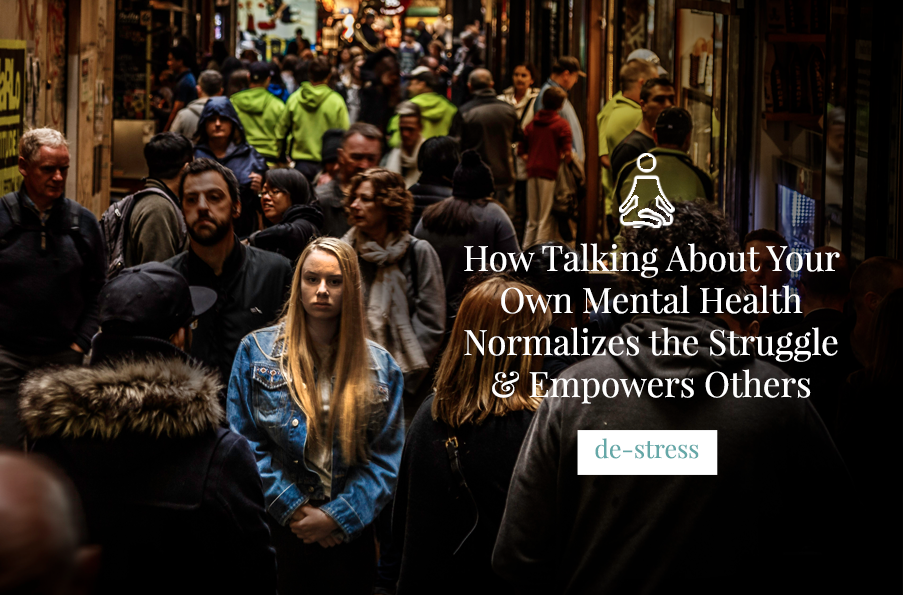 At the end of June, Madalyn Parker, a web developer, emailed her boss to say she would be taking two days off from work to focus on her mental health. Her boss emailed her back to thank her for her candor, and the woman posted the exchange to Twitter. Now it’s been retweeted over 15,000 times!

More and more people – from everyday folks like Ms. Parker to celebrities like Chrissy Teigen, Washington Nationals player Trea Turner, and even Prince Harry – are opening up about their own experiences with mental health struggles like depression, anxiety, postpartum depression, seeking grief counseling, OCD, and other conditions.

Sharing these individual and specific stories is powerful on at least two fronts: first, you are affirming to yourself that you have nothing to hide or to be ashamed of, and that is itself cathartic and self-affirming. Secondly, you are showing others that “mental health” is not just some vague concept that we’re all “supposed” to support and care about, but an issue that more and more people need to acknowledge, and be sympathetic to. The more someone hears your story and others like it, the more likely that person is to accept their own limitations, realities, and responsibilities to keep themselves healthy in all senses of the word.

The responses to these deeply personal revelations are evidence of how powerful they are, and also how far we have yet to come towards normalizing mental health and self-care. On the one hand, there has been a vast outpouring of support and gratitude when each of the above individuals (and many, many others) shared their stories. Readers identified with these people’s stories, supporting my second reason for sharing them – to show specific examples in people’s lives of how these issues actually affect us. The overwhelmingly positive reception that these stories received shows how deeply needed they are, and why we all need to share more of them. More than just, “I support mental health care efforts,” please consider sharing, “Here is my personal experience with my own mental health ups and downs.” It’s powerful for you and for the reader/listener!

And so, because I am asking all of you to be courageous and share your story, it’s only fitting that I share mine. Being fired last year after reporting harassment and sexism in the workplace really threw me for a loop. Whether warranted or not, being fired is a form of rejection, and high achievers especially, detest rejection. This event sent me to a very dark place, especially given the circumstances. For a certain few weeks, I couldn’t get out of bed. I didn’t eat. I just wanted to close my eyes and be alone. Completely alone.

I just remember feeling so heavy. As if my head weighed 500 lbs. I felt exhaustion as soon as I would open my eyes. Too weak to fight, I would immediately close them again. I would sleep all day long and into the following day.

Nothing motivated me, except for my dog. It’s a blessing that I have my dog, because he was the only reason I ever got out of bed – to walk/feed the dog and use the bathroom.

Now, I understand that my recent experience with depression only happened to me for a few weeks, and there are millions of people in the world affected by depression who work extremely hard at managing it every single day. But for me, this was a new and terrifying feeling. Terrifying because I knew what had started to happen to me. I was familiar with the warning signs. I was falling into the deep hole of depression and I desperately needed someone to throw a rope down so I could climb out.

Fortunately, because I had people in my life who had gone through similar, and who would be managing it for the rest of their lives, I was aware of what I needed to do which was ask for help. It was hard because I realized that by asking for help, I was exposing a weakness. But I knew that if I didn’t address it then, in the early stages, the alternative would have been devastating. I implore people to reach out to someone, anyone if you feel yourself starting to drift.

And as with any story, such as the ones I mentioned above, you always have critics, and despite the many responses thanking these people for sharing their story, there are of course the negative responses as well. It’s so tempting to just dismiss the “haters”, but the specific pattern of negative responses tells us how much work we still have to do, and why it’s still so important to keep sharing our stories honestly and openly. Illness in general, and chronic illness in particular, is still often seen as a form of weakness, especially in the workplace. How often have you seen some meme or joke whose punchline is basically, “X is so tough for powering through a marathon with a broken femur, but you stay home from work with the sniffles.”

And no matter how much research shows that many chronic health issues like diabetes are often completely hereditary and beyond the sufferer’s willpower, many people still harbor a vague notion that these conditions, along with cancer and other illnesses, could at the very least have been prevented with better self-care. Whether or not that may be true in certain cases, there is a fine line between advocating for preventative care and victim-blaming. The former seeks to help, while the latter is not about the person suffering at all, but about the person blaming. When we subtly and often subconsciously explain away someone else’s suffering by being caused at least in part by their own actions, we are often reassuring ourselves that our own actions are above reproach and we therefore need not fear similar suffering. Basically, it’s a defense mechanism that results in often harmful withholding of empathy.

These behaviors and stigmatizations may be slowly receding from acceptable public discourse around physical ailments, but they are still stubbornly prevalent in our cultural conversations around mental health. Such stigma is often harder to display when speaking of mental health in generalities, but it rears its head viciously in response to personal, specific stories like those shared by Ms. Parker and the above-named celebrities. Some nasty responses accused her of laziness, lack of self-discipline, manipulating her boss, and other aspersions.

Of course, we are making progress, thanks to courageous stories shared by individuals like these. Allison Abrams, a licensed psychotherapist in New York City, encourages people to specifically call it a “mental health day”, explaining, “The only way to reduce stigma is by normalizing. I think when you are explicit you are also giving other people permission to be open.”

Moreover, it may be even more important for men to talk about their mental health and the steps they take for self-care, because since illness in general and mental health in particular is often seen as weakness, it is sadly also often gendered as feminine in our society that still clings to some vestiges of machismo. “There’s definitely a gender factor,” said Abrams, who sees far more women than men in her practice. “I think it is harder for men just because of the way men are conditioned and the messages they receive that you’re supposed to be strong. … I don’t think it’s because men need it less and women need it more. I truly believe they feel more hesitant to reach out and seek help.” (All of Ms. Abrams remarks are taken from this USA Today article.) In a similar vein, Prince William and Prince Harry discuss the difficulty that men specifically and people in the military often have with discussing mental health, even above and beyond the hurdles faced by the population as a whole.

So, what’s to be done about it? Simple: share your story. Stop thinking in terms of “normal’ mental health vs. “mental illness” or “mental disorder” (even if those remain the clinical terms). Do you consider yourself not to be in normal physical health if you have some lower back pain that you have to watch out for whenever you do exercise? Probably not. Most of us accept that pretty much every adult has one or more “conditions” that we simply have to be aware of and sometimes take time to treat, that we need to recognize our different limitations, and that there is a wide range of severity before many of us start thinking of ourselves as having a “chronic illness,” much less a disability. Similarly, start thinking of the different aspect of your mental health as just that – aspects, or conditions.

I’m certainly not advocating that you minimize more serious conditions merely in order not to feel as if you aren’t “normal.” Quite the contrary – I’m advocating that we normalize what is true for almost all of us anyway – that we all live with various aspects and combinations of strengths and limitations. Secondly: share your specific story. I know that’s terrifying, but like I said earlier, even if it benefits no one else (and it most certainly will), the very act of sharing will be cathartic and self-affirming to yourself, declaring to yourself and the world that you accept all aspects of yourself and your health needs. But the beauty is that it will benefit others. The sum total of these specific and personal stories – hopefully from all genders, education levels, occupations, ethnicities, etc. – normalizes the very concept of mental health and empowers the listeners and readers to shed their shame, reject their stigma, and affirm their own wholeness – mental “warts” and all. And that’s the first step to taking control, taking care of yourself, and staying strong.

If you are struggling with something going on in your life that feels heavy, please reach out to someone. Seek counsel from a spouse, partner, friend, mentor, coach, and/or licensed professional. You don’t have to go it alone because you’re not alone. Please email  me if you have something that you want to share. I’m always here to help.