Unconventional Conventions: The 2020 DNC and RNC 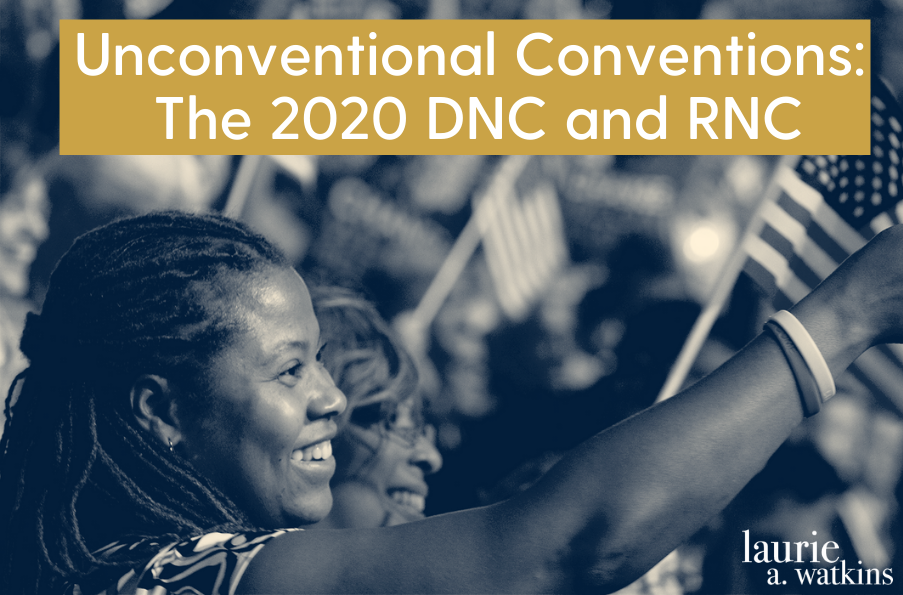 The 2020 Democratic National Convention was held virtually last week due to ongoing concerns with the Coronavirus pandemic.  The range of speakers was impeccable:  real people talking about their lives, republicans, independents, a former first lady, relatives of George Floyd, loved ones of those who have lost their battle with COVID-19, and who could forget 13-year old Brayden Harrington, who gave a gripping speech about how Joe Biden helped him overcome a stutter.

In the spirit of current times supporting both women and minorities, the Democratic party had Eva Longoria, Tracee Ellis Ross, and Julia Louis-Dreyfus act as M.C.’s over the course of the week to seamlessly transition between prerecorded and live video presentations.

The main focuses of the convention were: The Coronavirus pandemic, opposition to Trump and his policies, a plan and preview of what life would be like under a Biden/Harris administration, and an overwhelming level of support for Biden/Harris 2020.

Former First Lady, Michelle Obama, was the tremendous heroine of the event, bluntly stating, “Donald Trump is the wrong president for our country.  He has had more than enough time to prove that he can do the job, but he is clearly in over his head.  He cannot meet this moment.”  She further described the Trump administration as, “chaos, division, and a total and utter lack of empathy.”  She also touched upon false claims regarding voter fraud, the challenges with access to voting, and encouraged Democrats to do whatever they had to in order to get their vote counted.

The DNC included a lengthy segment honoring the Black Lives Matter movement, during which Representative James E. Clyburn from South Carolina stated that Mr. Biden would be, “a president who sees unifying people as a requirement of the job.”  Members of George Floyd’s family also spoke about carrying on the fight for justice.

One of the most powerful moments during the convention was hearing from Kristin Urquiza, the daughter of a man who lost his battle with COVID-19.  The father happened to be a Trump supporter and the daughter shared, “his only pre-existing condition was trusting Donald Trump, and for that he paid with his life.”

After plenty of amazing speeches, we finally got to hear Joe Biden accept his bid as the Democratic nominee for the United States presidency.  He promised, “Here and now I give you my word: If you entrust me with the presidency, I’ll draw on the best of us, not the worst.  I’ll be an ally of the light, not the darkness.”  His speech was full of hope and included a family values angle, with words from his living children and a tribute to Beau Biden, his son who lost his battle with brain cancer.

Conversely, the last couple days have been all about the Republican National Convention and President Donald Trump’s nomination for another term.  These speeches seemed to rewrite history (including very recent history) and paint an unfair picture of what the world would look like with Biden/Harris in office.

Trump’s handling of the pandemic and race relations were highlights of the RNC.  The fact that one of the speakers was the President’s son praising his father’s handling of the pandemic which varied greatly from polls, numbers, and statistics, prove the desperation for support.  Many speakers even referred to the pandemic in the past tense, as though it is over.  Trump, Jr. went so far as to say the election was a matter of choosing between, “Church, work, and school” or “Rioting, looting, and vandalism.” This couldn’t be further from the truth, or a larger hyperbole of reality.

Frequent attacks on the media, Democrats, and the World Health Organization were made during the RNC as well, in a determined search for blame.

President Trump continued with his conspiracy theories on vote by mail and how it’s an attempt to hand the election to Biden/Harris.  He did not however, point out anything about the importance of voting and having your voice heard.

While Trump’s speech was met with applause, it was simply because he had an in-person audience – something lacking from the DNC because the party and its candidates chose to follow CDC guidelines for social distancing and virus containing protocol.

On night two, speeches from the President and First Lady took place from the White House, which is being met with its own serious questions of ethics. Democrats furiously fact-checked RNC speakers, while also decrying the use of the White House and executive branch functions for political purposes. The entire display racked up one after another in violations of the Hatch Act.  Further calling out some of the ethical ramifications of the RNC, a State Department official told NBC News, “It is outrageously un-American for a sitting secretary of state to participate in a political convention,” which certainly happened during this 2020 RNC when Mike Pompeo delivered a speech while on a tax-payer funded diplomatic visit to Israel.

If you were unable to watch the Democratic National Convention and/or the Republican National Convention, I highly encourage you to watch some clips online or read transcripts of the speeches.  It is an extremely important election year.  Be sure to educate yourself and do what you have to do in order to have your voice heard and your vote counted.

As always, I am here to answer any of your questions.  Please feel free to reach out on any of my social media platforms and I will gladly chat with you!