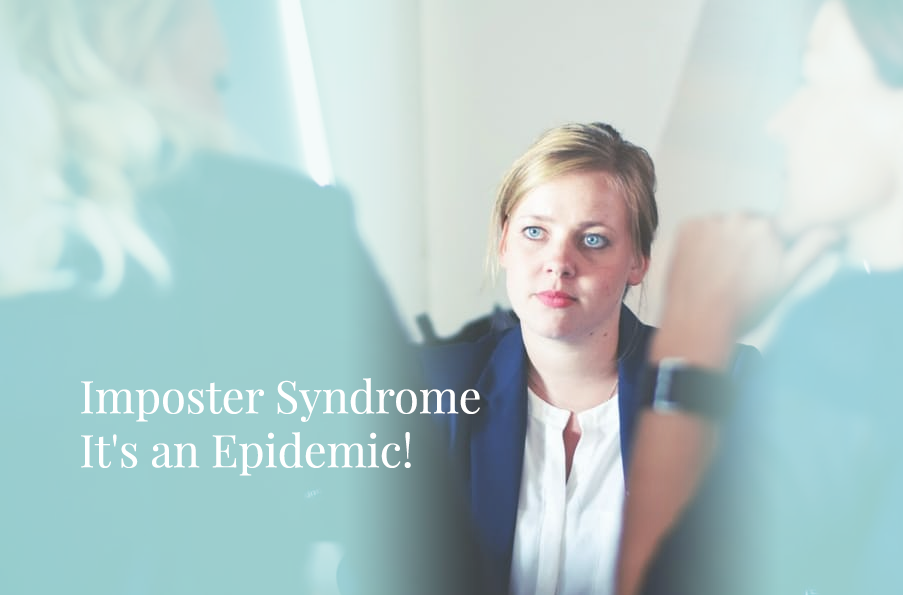 More specifically, do you ever look around you, whether at work or in your personal life, and wonder if everyone can tell that you have no idea what you’re doing? If so, you’re not alone! The phenomenon is called “imposter syndrome” and it is particularly common among high-achieving individuals.

Technically, this isn’t a “syndrome” at all in the clinical, psychological sense. Psychology professor Pauline Rose Clance coined the phrase in the 1970s (along with fellow psychologist Suzanne Imes), but Clance now says she’d probably refer to it as a phenomenon or experience instead, describing it as the tendency of high-achieving individuals to fail to internalize their accomplishments and achievements, and/or attribute those successes to external factors rather than their own efforts and talents. As a result, these individuals frequently manifest anxiety over being “outed” as unqualified, a fraud, or otherwise undeserving of the praise and acknowledgment they have so far received.

Sound familiar? Some studies suggest that Imposter Experience is more common among high-achieving women, but other studies suggest it afflicts high-achieving individuals regardless of gender. My own anecdotal experience is that I have noticed this behavior and self-doubt more often in women than in men, although that may also be because men are socially conditioned to hide it better and self-deprecation and humility to a fault is often seen as an asset of women in some workplaces and environments.

Here’s some really good news: Imposter Experience is not a personality flaw, but a reaction to certain stimuli and events. Moreover, it is an extremely common and normal reaction to many different kinds of everyday stimuli and events; some estimates put it as high as affecting 70% of people! That means that all those people around you, the ones who seem so confident and competent, the ones whom you’re terrified will “find you out” — they’re almost certainly experiencing the same anxieties as you, and are terrified you fill find them out! Simply learning that Imposter Experience is real, and that lots of people experience it, can help you feel less isolated and more equipped to deal with it.

Here are some pretty universally praised people talking about their own experiences with feeling like a fake, just to remind yourself that this isn’t just you, and it isn’t because you haven’t achieved enough or don’t deserve the praise you’ve received:
● Maya Angelou admitted, “I have written 11 books, but each time I think, ‘Uh oh, they’re going to find out now. I’ve run a game on everybody, and they’re going to find me out.’”
● Neil Gaiman says he used to have elaborate fantasies of someone knocking on his door to make him stop writing and get a real job.
● Jodie Foster thought she’d be forced to give back her Oscar.
● Tom Hanks says self-doubt is “a high-wire act that we all walk.”
● Chuck Lorre, the wildly successful writer and creator of hits such as Two and Half Men and The Big Bang Theory has said that sometimes he feels like he needs to “go and hide”. (Click that link for lots more examples of famous, successful people talking about their own self-doubt and how normal it is).
● Tina Fey once confessed that she sometimes screams inside her head, “I’m a fraud! They’re on to me!”
● Sonia Sotomayor said she was “too embarrassed” to ask questions while at Princeton University, and said, “I am always looking over my shoulder wondering if I measure up.”
● Meryl Streep gets “cold feet” before every new project and told a reporter in 2002, “I don’t know how to act anyway, so why am I doing this?”
● Emma Watson has said that, after Harry Potter, she “feels like a fraud.”
● Australian tech billionaire Mike Cannon-Brookes admits, “Imposter syndrome doesn’t go away with any form of success.”

Here’s some not-so-good news: because Imposter Experience is so common, and so commonly unrecognized, if it goes unaddressed, you can develop anxiety, stress, low self-confidence, depression, shame and self-doubt. You might even limit exploration and avoid new experiences due to the fear of exposing failure.

Clance, with input from mathematician Nancy Zumoff, developed a scale to measure the extent to which a person did or did not feel this way. The scale asks subjects to rate as true or false a series of statements, such as:

I often compare my ability to those around me and think they may be more intelligent than I am.

If I receive a great deal of praise and recognition for something I’ve accomplished, I tend to discount the importance of what I’ve done.

When I’ve succeeded at something and received recognition for my accomplishments, I have doubts that I can keep repeating that success.

If you answered true to any the of above statements, you could be experiencing impostorism.

Here are some common signs that you may be experiencing feeling like “an imposter”:
● Perfectionism
● Overworking
● Undermining your achievements
● Fear of failure
● Discounting praise
● Attributing success to pure luck
● Dwelling upon extreme failure, mistakes, and negative feedback from others

The easiest way to deal with Imposter Experience is to discuss the topic early and often with other individuals, including peers, mentors, family, friends, and other loved ones. Most people who experience these feelings of extreme self-doubt and fear are unaware of just how widespread these feelings are, and just how many of their peers and even mentors and supervisors feel the same. Once these topics are discussed, everyone can feel a little better knowing they’re not alone in these experiences.

Here are some more suggestions for resisting and combating feelings of being an imposter or a fraud:
● Be kind to yourself
● Seek support and share your feelings. Develop a strong support system that provides regular, ongoing, honest, and constructive feedback on your performance.
● Do not use “just” and “only” when describing your work.
● Do not apologize for perceived mistakes.
● Make a list of accomplishments. Positive feedback and success stories can also aid in managing impostor syndrome. Make sure to keep this list current and ongoing – keep adding to it!

If you’re interested in further reading, I highly recommend Amy Cuddy’s book Presence, which provides greater information on research done by Clance, “Given imposterism’s prevalence, it’s impossible to identify the root cause for each individual instance. Early childhood experiences have been linked to imposterism, but so have family dynamics, societal expectations, prejudices, personality, and life experiences at school and in the workplace.”

“Certain traits and experiences have been found to go hand-in-hand with the imposter experience. But one of the most prevalent factors is a fear of failure, which has been cited as the root problem across many studies.”

“Who fears failure the most? People who have achieved something – people who are demonstrably anything but frauds.”

One more book that you may find of interest offers an opposing take on imposter-hood, Hello, Sunshine. The book explores the possibility of what a life based on forgery would look like. The book will leave you comparing the protagonist’s tangled lies to your own more honest successes and considering the value of hard work and commitment to achieving your dreams. As the unlucky heroine rebuilds her life and learns to define herself in more authentic ways the message is clear— you don’t need to fake it to make it (and to be honest you probably haven’t).

Look, here’s the truth, many of us will never completely shed our fears of being fraudulent. We’ll just work them out as they come, one by one. We have to, or they’ll eat us alive. And yes, a new situation may fan the flames of an old fear that we thought we had long extinguished, but the more we are aware of our anxieties and the more we communicate with others when these feelings creep in, then the easier they will be to shrug off the next time they come up.

You’re not alone. More people than you think are feeling this way, and it’s normal. I feel the creep at least once a day. Seriously.

But, I have learned to manage it and I have found that talking it out with people like mentors, my husband, and close friends really help. The more we share, the better for everyone, so please consider leaving a comment if you found this article helpful.