It’s Strong to Ask for Help 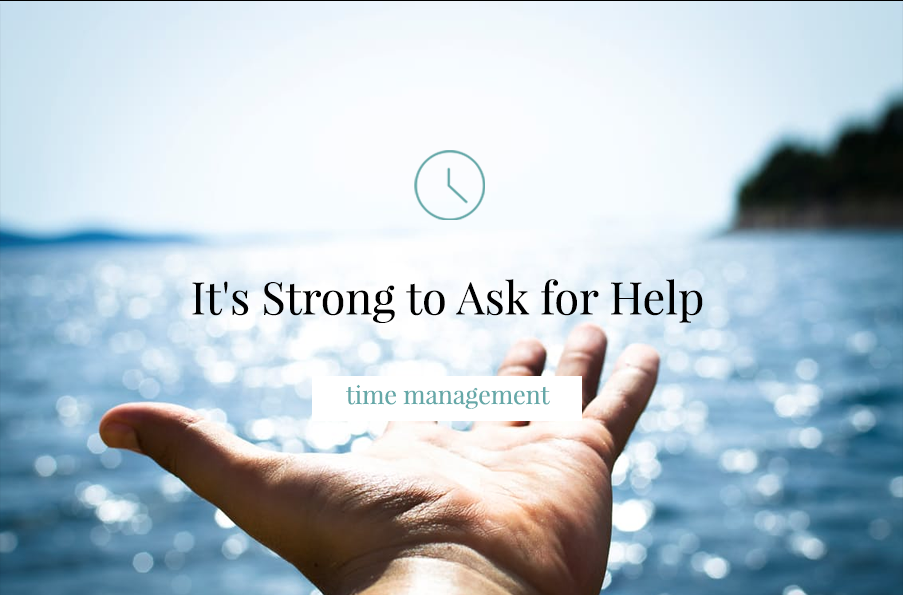 I’ve said it before: life often feels like a pie-eating contest where the prize is more pie. The more competent and capable you are, the more you get on your plate. Partly that’s because others around us are so grateful to have a competent and capable person that they give us more to do, and partly that’s of our own doing, that we know we can do the best job, so we just go ahead and do it ourselves.

The danger, of course, is burnout and unhappiness. On the other hand, we sometimes reject new projects or goals because we feel like we already have too much on our plates and one more thing would just be the final straw. Here’s my answer to both: do less and do more (I know, it sounds contradictory, but hear me out): ASK FOR HELP!

So, first the “both do less and do more” aspect: We want to do less of what we don’t have to tackle ourselves in order to make room (in our time, schedules, and in our focus and energy) to do more of what we want to do, and/or what we can only do ourselves. Asking for help is a combination of delegating and self-advocating, and it can be very empowering!

Let me give you an example from a recent book tour stop I had: my schedule was very tightly packed, as usual, and I had several events back-to-back. Plus my flight was late, so I had to go directly from the airport to my first event, and I was still in my travel clothes and didn’t have time to stop off at the hotel like I had originally planned (that’s another lesson: always have a plan, and always be prepared to chuck that plan out the window and improvise when circumstances inevitably change – but you still need the original plan!).

Anyway, I was in the car and saw a Planet Fitness, a gym of which I am not a member. But I decided that the worst thing they could say was, “No,” so I stopped, walked in with my overpacked garment bag, and explained that I was on my way to an event but really needed to change and freshen up, and could I please use their locker room, even if I might have to purchase a day-pass. The front-desk staff was so friendly, even though I was nervous that I was imposing on their business, and they said that wasn’t a problem and let me use the facilities at no charge. It was a relatively small favor, but I felt like a huge burden had been lifted from me: I could take a few minutes and center myself and not worry about changing in the car and arriving to my event all disheveled.

Now, notice a few key things I did along with asking for help. I was prepared: I had my bag with my clothes and makeup kit, so I didn’t have to use any of their resources unnecessarily, and I didn’t have to go back to the car so I could minimize the amount of time I imposed on their hospitality. I offered more than one way they could help me: either let me use the locker room/restroom or sell me a day pass. And I gave them a polite out in case they couldn’t/wouldn’t help: “I understand I’m not a member so if you can’t accommodate me I totally get it!”

There’s a big difference between asking someone to do something for you (starts to sound like laziness/entitlement) and asking for someone’s assistance where you’re already bringing some effort to the table, and also minimizing what you’re asking of them.

In previous posts I’ve talked about what to do when someone is asking for your assistance: make sure you’re supporting/assisting and not just doing their work for them. Similarly, you want to respect the other person’s time and energy when you’re asking for help.

But as long as you’re respecting the other person, and you don’t feel entitled to their assistance but are instead grateful for it, and are understanding if they can’t or won’t help, then asking for help is absolutely part of going from stressed to strong! No one can do everything themselves, and even if they can, that doesn’t mean they should.

If you have a big project at work that involves a lot of small tasks, and you have interns or other staff that you manage or train, consider delegating some tasks to them. At first it may seem like more work because you may have to train them or explain what you want, but ultimately it helps all parties – they get more training and experience, and you get more assistance. It’s important to keep in mind that while you always have a right to give guidance and preferences, you don’t want to take that too far and micromanage every aspect so it’s done exactly “how you would do it,” because that’s both not fair to the person who is giving you assistance, nor will it really relieve you of any burden since you’re working just as hard supervising them as you would just doing it yourself. Remember: “Done is better than perfect.”

Often we say, “I don’t have time for that,” but the truth is closer to, “I don’t have the physical and/or mental energy for that.” That’s a great opportunity to look for assistance, and in our awesome tech era there’s often “an app for that”! Apps like TaskRabbit, TAKL, Handy, and Thumbtack help you delegate tasks to professionals. Use a messenger service or a car service. Hire a professional cleaner once a month. I’m not telling you to kill your budget or anything, but sometimes spending a little money is worth saving a lot of your time and/or energy. The resources are there! Be strong and use them, so that you can be a resource to yourself and others as well.

How am I doing? Are you enjoying the content and topics of the articles I am writing? Let me know. I’m here to serve you. Stay Strong!