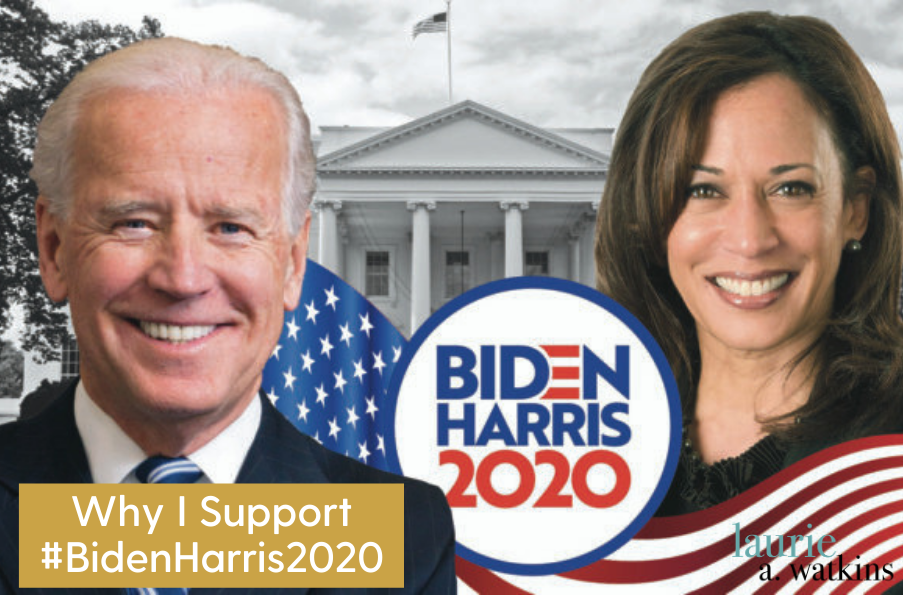 I have made no secret of my support for #BidenHarris2020.  I had an inside look at some of Joe Biden’s character when I worked in the Obama Administration, and during both Obama/Biden presidential campaigns.  I also wrote about my support of Kamala Harris and how Honesty Leads to Opportunity.  I find these two to be the best candidates to lead our country for the next 4+ years.

While I believe #BidenHarris2020 will make many important moves to undo some of what the current administration has done, my main reasons include immigration, women’s issues, black America, and environmental security.

Immigration.  Joe Biden plans to take urgent action to undo Trump’s damage and reclaim America’s values.  The plans include modernization of our immigration system, welcoming immigrants into our communities, and implementing effective border screening.  On Thursday, Joe Biden pledged to sign an executive order on his first day as president for a task force to reunite 545 migrant children separated from their families at the US-Mexico border. Lawyers have been unable to find parents of the children after the majority of families separated were deported back to Central America.

Opposing some of the atrocious remarks by our current president, Biden and Harris will reassert our commitment to asylum-seekers and refugees.  Joe Biden would direct necessary resources to ensure asylum seekers’ applications are processed in a fair and fast fashion.  There would also be an increase in the general care, compassion, and sensitivity of these individuals.  I also have confidence in #BidenHarris2020 reinstating DACA and rescinding the unethical travel ban on certain countries.

Women’s Issues.  I think caring about women’s issues is a huge deal right now.  And I’d love to see an administration that has a WOMAN helping fight WOMEN’S issues.  The outcome of this election will shape many health issues of importance to women for years to come. From the ongoing COVID-19 pandemic, to the uncertain future of the Affordable Care Act, to threats to reproductive health care, the outcome of this election will have major consequences for women and the nation as a whole.

Biden has made a commitment to protecting contraception, contraceptive coverage, and Title X. He has also pledged to end the rape kit backlog, which would bring peace to thousands of victims.  He has also made one of his first 100 days priorities to enact the Violence Against Women Reauthorization Act.  Joe Biden and Kamala Harris have spoken on expanding Family and Medical Leave to cover victims of rape, domestic abuse, and stalking to be able to receive proper care and counseling.  They have also stated the importance of increasing education in our schools on prevention education for violence against women and violence in relationships in general.  This expands even to college campuses, where the incidents of rape are on the rise.  Having college administrators and staff trained on how to respond to these issues could help countless people while they are away from home and family.  #BidenHarris2020 supports Planned Parenthood which I strongly believe should be accessible to everyone.

Black businesses often lack the capital they need to succeed.  A Biden/Harris administration would ensure equal access to credit and capital.  Joe Biden has spoken on his housing plan which includes an emphasis on making homeownership and access to affordable housing for Black, Brown, and Native families a priority.  Biden has plans to establish a $100 billion Affordable Housing Fun to upgrade already built infrastructure that is used for affordable housing.  Many of his economic plans also would help bridge the racial wealth and income gaps.  In addition to housing gaps, Joe Biden and Kamala Harris have committed to increasing access to high-quality education for all and abolishing the inequality in our education system.  Finally, Biden will mandate that companies publicize their overall workforce diversity to hold all companies accountable.

Environmental Security. Donald Trump has routinely dismissed the threat and stubbornly refuses to act. The threat is no foreign adversary. It is man-made climate change.

Defeating climate change demands clear-eyed determination, not denial. Although the need for American leadership has never been greater, our president retreats. But everyday Americans get no deferral from this war. His craven response to this existential threat makes Trump unfit to be commander in chief.

Joe Biden will lead the world in addressing the climate emergency.  He plans to create new industries that reinvigorate our manufacturing and create high-quality, middle-class jobs in cities and towns across the United States. We can export our clean-energy technology across the globe and create high-quality, middle-class jobs here at home.  Getting to a 100% clean energy economy is not only an obligation, it’s an opportunity.

As president, Biden will lead the world to address the climate emergency and lead through the power of example, by ensuring the U.S. achieves a 100% clean energy economy and net-zero emissions no later than 2050. A #BidenHarris Administration will stand up to polluters who disproportionately harm communities of color and low-income communities.

To elect humane candidates, every voter must get their voice heard this election via mail or in person.  We are only a few days away from Election Day.  I am going to be anxiously awaiting the results.  I’d love to hear how you are passing the time until there’s a final vote count. America cannot afford four more years in flames and being inflamed by this president.