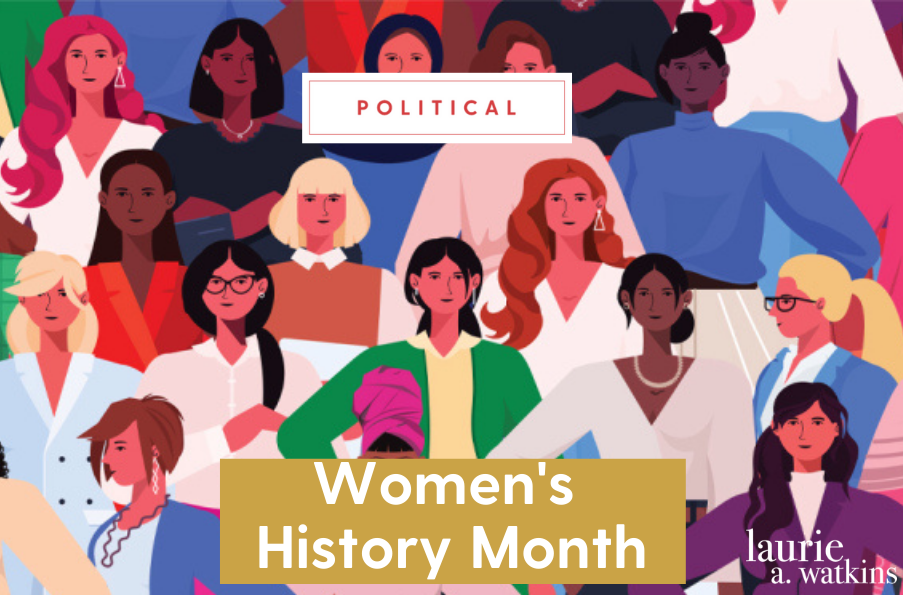 I recently wrote about Black Women Making History in honor of February being Black History Month.  Now that we are in March, we are observing Women’s History Month.

Not that long ago, a few decades really, women’s history wasn’t part of history books in school, or addressed in movies, or recognized by anyone.  The progress we have made to get to women’s history having a full month to recognize and celebrate it, is amazing.  However, we still have a way to go.

Following suit, Women’s History Month is currently observed in the UK, Australia, and Canada.  That is amazing; however, that only covers 4 countries (if you count the US).  That means there are still so many places around the world that need to begin recognizing the important roles women play in history, in the classroom, in the government, and so forth.

The National Women’s History Alliance selects a theme for the month each year.  For 2021, they are extending their 2020 theme of Valiant Women of the Vote: Refusing to Be Silenced.  I love this particular theme since it focuses on the important election year we had and how crucial women’s voices are to get us where we need to be as a country.  It honors the passage of the 19th amendment and recognizes the battle women went through to earn the right to vote.

It is especially cool that Women’s History Month happens in March, because plenty of other noteworthy historical advancements happened for women during the month of March.  For example:

Title IX was passed on March 1, 1972.  This prohibits sex discrimination in all federally funded education programs.

Beyond the 19th Amendment, The Equal Rights Amendment also guarantees rights regardless of sex and was passed by the Senate on March 22, 1972.

The first suffragist parade happened on March 3, 1913 in Washington, DC.

The National Women’s Party was formed in March 1917.

Women have been an integral part of history dating back to the founding of the United States: Abigail Adams, Harriet Tubman, Rosa Parks, Susan B. Anthony, and so many more.

What about the women from our modern-day times that will likely be in the history books one day?  The ones who are currently making major changes in our society.

There are those women who have bravely spoken publicly about their struggles with mental health: Michelle Obama, Meghan Markle (That interview will likely be mentioned in next week’s post because – holy cow!!), Chrissy Teigan, and Demi Lovato.  These women are all PUBLICALLY discussing the rather taboo topic of mental health, and giving women everywhere the strength to do so and not feel alone.

There are the women taking leadership roles at major companies like: Roz Brewer (the only Black woman Fortune 500 CEO) and Marillyn Hewson (executive chairman of Lockheed Martin), and then there are women like Sara Blakely who not only runs a large company, but created it from scratch in her apartment.  These women are changing the dialogue from “marry a CEO” to “be a CEO.”  They are all women we can look to for inspiration and even motivation to push ourselves to our dream jobs or to move up in our careers.

There are women who have made enormous impacts on science: Katherine Johnson (she sadly recently passed away in 2020 but her calculations as a NASA employee were pivotal in getting Americans into space.  (She was profiled in the movie Hidden Figures.)  Mae Jemison, an American engineer, physician, former NASA astronaut, and the first Black woman to travel into space.  Gladys West, she developed math that was the foundation for GPS technology – I’m sure we all use that!  And, Jennifer Doudna (a biochemist who is a primary developer of CRISPR, a technology for editing genomes that is likely going to end many diseases) the first woman to win the 2020 Nobel Prize in Chemistry.  Women’s roles in science have exploded over the years and these are just a few of the modern women helping to continue propelling that momentum forward.

We celebrate Women’s History Month to remind us of the accomplishments of women throughout history and the impact those accomplishments had on our society.  Women have been trailblazers and moved almost all fields forward: science, technology, politics, art, health, and so much more.

How will you celebrate women and observe Women’s History Month?  If you can learn something about just one woman making a difference or who had an impact on our nation’s history, you are doing your part.

I would love to hear about the women that inspire you, either from history or someone from modern times that you think will be in the history books someday.  I am trying to expand my knowledge of those making a difference.  Feel free to share some women in the comments below or on my social media pages.  Next week, I plan to highlight a different woman each day on my social media accounts to encourage everyone to talk about women making history.

If you’d like to read some amazing books honoring women or women’s history, here are some suggestions:

The Secret History of Wonder Woman by Jill Lepore

We Should All Be Feminists by Chimamanda Ngozi Adichie

Women in Science: 50 Fearless Pioneers Who Changed the World by Rachel Ignotofsky

My Own Words by Ruth Bader Ginsburg

Finding my Voice by Valerie Jarrett