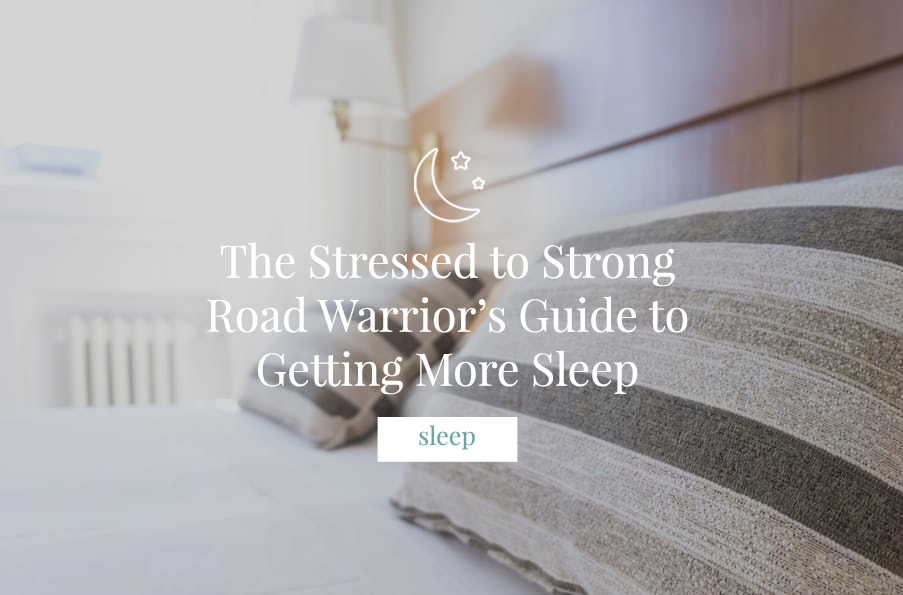 “The most basic shift we can make in redefining success in our lives has to do with our strained relationship to sleep.”

Do you travel for work and feel like you live out of your suitcase?

I’ve lived like that for most of my career, allowing my job to dictate my personal schedule, sleep time, meals, etc. It became unbearable when I began traveling between different time zones, which made it impossible to get a peaceful night’s sleep.

Sleep Your Way to the Top:

For people who travel to the same city multiple times; try to reproduce the same environment by bringing things from home, whether it’s a pillow, pictures, or scents like lavender linen spray. Try staying in the same hotel, and even go so far as requesting the same room. Make sure your room is away from the elevator on a floor that’s high enough so you won’t hear ground level noise, and make sure you bring your workout gear.

Ronald Kotler, MD, DABSM, Medical Director at the Pennsylvania Hospital Sleep Disorders Center, says it should be a priority whenever you travel that you’re going to work out on the road. If you know your hotel has a fitness center and/or a swimming pool, be sure to throw the proper gear in your suitcase. You’ll feel better if you do so.

It’s also important to eat sensibly on the road. Sometimes when people travel, they overdo it and go out to restaurants, eat more food than they should (and perhaps drink more alcohol than they should), and eat later than they should. Well, here’s the truth; all of those things mentioned are going to disrupt your sleep. So, try and keep those similar habits, similar bed times, similar meal times, etc. And if you have an important meeting that may keep you up late, in fear that you won’t wake up, Dr. Kotler recommends setting a couple of alarm clocks. Set your own alarm clock and also ask the front desk to schedule a wake-up call. That way you have a backup that you can rely on.

So, the key question at hand is, why are we getting less sleep?

Do we need less sleep today than we did a century ago?

Kotler says the answer is “no!” Nevertheless, the fact is that we are getting less sleep. If we go back to our ancestors who worked on the farm, we come to realize that our sleep schedule was dependent upon how light it was outside. If it was nighttime and dark, people slept. Conversely, when it was light out, people worked. Everything changed after Thomas Edison invented the light bulb, which gave us the ability to stay awake at any time of day.

With the use of artificial lights and stimulants such as caffeine, we are able to fight off the physiological need to sleep. The danger is that we need sleep to feel refreshed, for hormonal balance, for physical and mental repair, and for memory consolidation. According to Kotler, when we don’t get enough sleep, we take away our ability to undergo a very important process that allows our bodies to heal and feel refreshed, increasing the chance for long-term consequences.

The average adult needs seven to nine hours of sleep, and it is biologically determined for each individual so that different people need different amounts of sleep within that range.

However, according to Kotler, people who say they can get by on less sleep are often masking a physiologic tendency towards sleep, often by staying very active. For example, Kotler recalls the time when he was a medical intern starved of sleep and the only way he could stay awake was to remain active. He just kept moving, going from patient room to patient room, but the moment he sat down for a lecture it became easy for him to fall asleep. By playing these games, not only do we rob ourselves of the need to get restored and refreshed, but also, Kotler says that it can also contribute to medical disorders and premature death.

Let’s face it, each of us is more likely to be a professional powerhouse if we aren’t asleep at the wheel. Just as I do with all of the Strength Seekers in my Command Your Day Now program, I challenge you to go to bed 30 minutes earlier than your usual bedtime tomorrow night. That’s right, this will require you to better manage your time, getting all of those To Do’s checked off before bedtime.

I know you can do it, and as usual, I’m right here to help you. If you need more ideas, or advice, please get in touch with me. That’s what I’m here for.